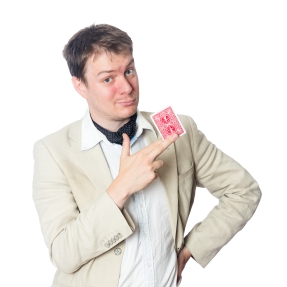 Owen Lean is a professional entertainer and writer from London who has
the unique honour of holding the worlds only degree in street magic. The
year after he recieved his degree, Owen’s house burned down along with
everything he owned, and so he set off on an adventure, performing on
the worlds streets.

While on his extraordinary journey Owen spent his free time writing,
specialising in humour. While living in Paris, Owen became a featured
writer in Expatriates magazine. He is now a regular writer of Role
Playing Games for the Pinnacle Entertainment Group, including the
acclaimed East Texas University adventure “Horror For The Holidays”.

After being asked to give a TedxTalk in 2014, Owen has settled back down
in London and somehow managed to get married. He now lives there, and
when not writing or performing, can be found frantically trying to renew
his Irish passport in case of Brexit.