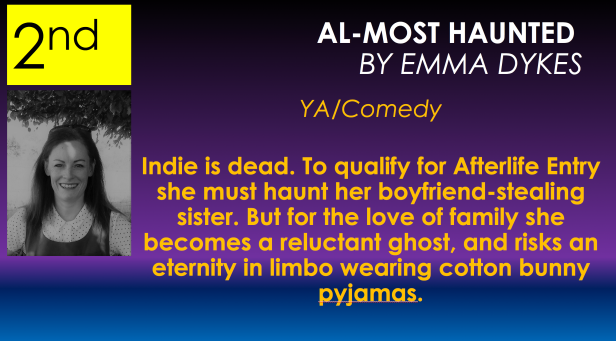 Indie didn’t know where to look.

Ideally, she’d look at the Cheerleader.

Or the Star Trek fanboy.

But right in her eye-line was a man with no head. Seriously.

Indie didn’t want to be rude, but she couldn’t help looking.

A door creaked open, and through a fog of dry-ice a Gatsby-girl in a fringed dress called out,

Time to ditch this American-Teen-Hallowe’en. Indie raised her hand and smiled at the headless gentleman.

He didn’t smile back.

‘I’m Candace,’ said the Gatsby-girl, ‘Have a seat, dear.’ She indicated a chair with her cigarette holder. Indie sat, pressing her palms on the desk. Candace opened a large, leather bound ledger. ‘Date of birth?’

‘I just need some details before we get started. Shoe size?’

Indie looked down. What sort of questionnaire needed her shoe size and also…

‘…why am I wearing my pyjamas?’

Candace leaned over. ‘Your questions will be answered my darling, I promise.’ She adjusted her string of beads. ‘Although not necessarily to your complete satisfaction. There are no absolutes in life my dear, or in death it would seem.’ A little afterlife humour to break the ice. It never worked. ‘Too soon?’

Indie swayed gently in her seat.

Candace clicked off her biro. ‘You’re ready for the big reveal. You’re dead honey. Hit by a car, crossing the road. Texting or Snapchat? Any of this ring a bell?’

It did. Completely. Indie exhaled.

She wasn’t mad and she hadn’t eaten a bad prawn. She really was dead.

Emmy stood on tip toes, left arm reaching up as if hailing a bus. With deft fingers, she deposited the old volume on the top shelf. She repeated the process, taking a book from the pile balanced precariously in her right arm, before placing it alongside its leather-bound neighbours. The shop was cramped, antiquated and musty.

Once upon a time she’d loved nothing more than watching the motes of dust dance and sway in the narrow shafts of sunlight; as if the words from the books she adored were alive in the very air around her. Emmy’s parents, indulging their only child’s whimsy, had allowed her to visit Adam’s Antique Books often and she and Maggie Adams had instantly become best friends. Kindred spirits, they’d gossiped and giggled over the heroes in their favourite romances; the naughty twinkle in Maggie’s soft, blue eyes mirrored in Emmy’s espresso ones.

So, when her mother called last week with news of Maggie’s passing, Emmy immediately made the three hour train journey back to Devon from her London College; memories wrapped around her like a comfort blanket: The overpowering sweetness of lavender soap. The funny little glasses she wore on a chain around her neck. The older woman’s surprisingly girlish laughter. The dancing dust.

Whilst saddened by news of her friend’s death, Emmy wasn’t surprised, for Maggie had lived to the wonderfully ripe old age of ninety-seven.

Learning that Maggie had named her as sole benefactor, though, now that had been a shock. 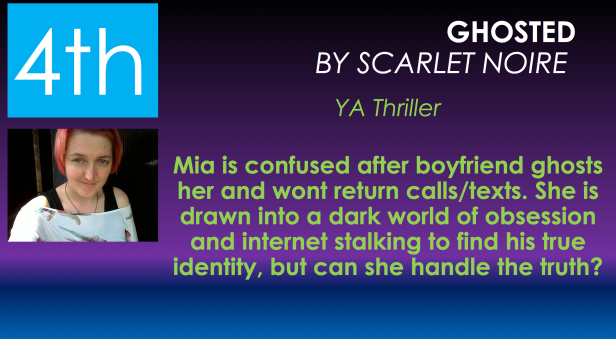 I was doing my usual Facebook stalking and searching through my ex’s old account when the email arrived.

Checking through an ex-boyfriend’s messages and posts, looking at the pictures of the two of us together. Then wondering how I could have been so blissfully unaware of his ‘other’ life.

I felt like contacting that TV show, Catfish. Technically, I hadn’t actually been catfished, I’d met him in real life for a start. I’d run my fingers through his hazel brown hair and sprayed some of his Lynx deodorant on my own arm so that I could smell him when we weren’t together. I know. Another cliché, right?

He’d been real. We’d been going out for nearly four months, then he just vanished. It wasn’t like he was a missing person, the police weren’t interested, and there were no appeals. He just stopped texting back, or answering my calls. Now six months on I’m still checking his account. Pathetic or what?

I was stupid. I didn’t even know where he lived! I was just so excited to be going out with him, I believed everything that came out of his mouth.

Then the email arrived:

Wonder where he went? I can help you find him.

I felt the warmth drain from my body and goosebumps pin prick across my skin as I read the email. Who the hell was this? Was it some sort of sick joke?

It took Megan less than an hour to get home. Not that it was home any more, but what else do you call the place where you grew up? Dad’s house. An hour to go from one world to another.

There was no chance of Mum driving her, so she had to get the bus to Dalbeattie and then down the coast road to nowhere. She had tried, for whatever reason, sheer stubbornness perhaps, to persuade Mum to come. ‘He says he’s ill,’ she said.

‘I’m seventeen,’ Megan pointed out. ‘You can’t stop me seeing him.’

Mum’s mouth twisted. She shrugged and set about some vigorous dusting. ‘Fine. Go.’

In her bedroom Megan kept a small picture of the three of them from years ago. Megan, aged only seven, was dancing in the foreground, waving a plastic spade. Dad had his arm round Mum and she was laughing. Yes, Mum laughing. So her facial muscles could actually do that. Megan kept the photo because why the hell shouldn’t she, and anyway, she was sure it annoyed Mum.

Well, she could still have something of her father. That wasn’t too much to ask. School was over for the summer, the sun was shining, so why not go away for a few days? It would make a break from Mum.

One thought on “#PeerPitch Winners 2nd to 4th – Opening extracts”