There were six of us in the lantern-lit room, our shadows cast around the walls like daemons. I still slept with the light on when I was at home. Here, in the shadowy place, the lantern light only made the murky corners even gloomier.

The woman with the dark curtain of hair leaned in close and took my tiny hand inside her big one. I couldn’t quite see her face, but something about the way she squeezed my hand felt familiar. There were a couple of other children in the room, each huddled close with their own grown-ups. The shutters on the single window were closed, but I knew it was night time. It was always night time. And the whole time, the never-ending banging. Someone hammering on the door, trying again and again to get in, but which door? In the tiny room, there were seven doors, each one in the same identical wood. They took up nearly every inch of wall space. The other children huddled together, whimpering. Something cracked. Whoever wanted to get in, they were coming. A tall man with rough palms squeezed my other palm.

Crash. One of the doors burst open, and a dozen men with glinting swords rushed into the room. The grownups screamed; the children screamed louder. There was the brown wood of the doors, the bright steel of the swords, and then as the screaming stopped, came the red, red and wet. Blood.

I shut my eyes tight. 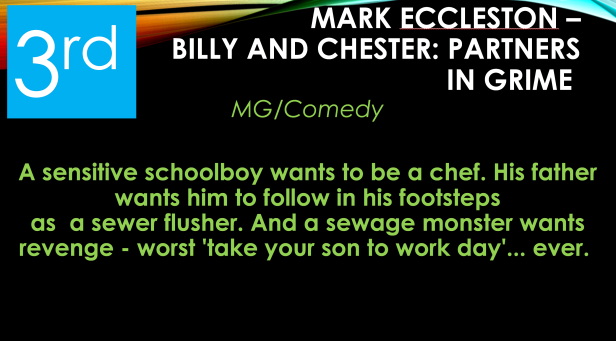 Billy and Chester: Partners in Grime by Mark Eccleston (@MarkEccleston1)

Deep beneath the streets of London, Billy and his son Chester trudged through the darkness, the steaming water slopping at the knees of their rubber waders.

‘Don’t panic, son.’ Billy held the lamp in front of him and sniffed the air. ‘I reckon we’re right under Chinatown. I’m getting a whiff of soy sauce from that incoming waste pipe.’

Billy had the most sensitive nose in the business. He could navigate through the maze of Victorian tunnels by smell alone – just one of the many reasons he’d won the famous Golden Plunger award for the past 23 years.

‘You see,’ he said, pointing at a half-eaten dumpling that floated past on a stream of murky water. ‘Right again.’

Billy strode on, a beaming smile playing in the lamp light. Chester wedged his hands deeper into his pockets, and waded after him. He’d only just started high school but was already much taller than his father. A pale boy with an unruly bloom of hair that spilled over thin shoulders. Their shadows on the brick walls looked like a gnome was being stalked by a giant stem of broccoli. Eventually Chester caught up.

‘Dad. Remind me why you love this job?’

‘It’s the variety,’ said Billy, without hesitation. ‘Every day is different.’

They waded on, Billy smiling serenely as a happy memory sprang to mind.

‘Like the time I was down here during the World Cup. Everyone went to the bathroom at half time. And I mean everyone. They had to fish me out at the Thames Barrier.’ His chuckle sounded exactly like the effluent sloshing round their legs. ‘But don’t get me wrong son. It’s not all fun. As I always say; someone’s got to keep London moving.’

A pale face emerged from the darkness, skin the colour of a skull, illuminated by the entrance hall light. It belonged to a creature thought only to exist in the hearsay of urban legends, or fuzzy pictures shared on social media sites. Yet here it was, dark clothes and crow-black hair, slipping quietly up stairs and across the dark landing of Frost Hall.

He crept from room to room, a weapon clutched tightly in his hand. The knife and handle were polished black obsidian, the blade jagged like broken teeth.

Mr Frost had been asleep next to his wife, his breath gently tickling the back of her neck. The creature left both Mr and Mrs Frost, side by side forever, the bedclothes no longer rising and falling. Both were dead before they ever knew what had happened.

The creature’s well-polished shoes were silent against the carpet as he reached the top floor of Frost Hall. He hesitated outside the loft room, and traced his fingers across the name on the door. Winter’s Room. He pushed the door open and walked in.

Inside the bedroom he watched the sleeping child for a moment, intrigued by her hair, in stark contrast with the colourful wallpaper and toys, each strand was as white as freshly laid snow. She appeared to be an unusual child, but then this was just another job, and he always completed a contract. He prided himself on his reputation, ever the professional and followed instructions to the letter.

The first thing I notice is the pain in the fingers on my right hand, like something has forced dirt up under my fingernails. It’s an itchy kind of throb that makes me want to shove them into my mouth like I’m six years old. There’s throbbing in my head too – what I imagine it must be like to have a hangover – so maybe this is one of those, but I’m not properly awake enough to know.

It’s dark but already hot, like it hasn’t cooled down from yesterday. There’s the sound of a swimming pool filter, vibrating through my cheek, hard against the ground, and the smell of chlorine. I get such a strong sense I have been here before, and a flood of fear like cold water. Everything about this is wrong.

It’s only when I press my fingers into the bricks and lift my head that I see why.

There’s a dead body face down in the water less than a metre away, with the ghost blue of the pool light all round it. I scramble backwards onto my knees and retch, but all that comes out is spit.

The body is exactly like they look on True Crime – marble white skin, arms and legs hanging, hair drifting out to one side along with a trail of blood like red flowers. Seeing it makes my head so light and my stomach so heavy it feels like I’m being stretched into two bits.