I’m going to go for Charlie from the Perks of Being a Wallflower. He can read people, understand their wants and needs and always assumes the best, even when faced with harsh realities. He is a lost little boy struggling along in the body and mind of a teenager – and (spoiler alert) is the survivor of child sex abuse by a family member he still loves. Charlie is the voice of every child who struggles to understand what love is – and why it isn’t wrong.

I’m going for Hermione Jean Granger as my favourite protagonist. She’s brave, smart, hardworking, ferociously loyal and determined. She stands up to the bullies and for the rights of every minority in her world. For me, she is the real hero of the Harry Potter books as they would all have been dead a long time before book 7 if it wasn’t for her (well, maybe not Harry ‘cos of that prophecy thing with Voldemort, but certainly Ron and a whole bunch of others and HP would have been badly injured!). She is Harry’s crutch and her compassion and cleverness help them through everything that those crazy 7 books threw at them!

Celaena from Throne of Glass by Sarah J. Mass

Celaena is a not your typical protagonist – at the start of the novel, she is a prisoner in a slave labour salt mine and a well-known assassin and still only 18. Her transformation throughout the book is remarkable and while appearing cold and calculating at the start, she develops into a sensitive, emotional and relatable character. In a cut-throat world, she maintains your interest and surprises you throughout.

Mare is a nothing like a typical 17-year-old girl, and the opening scene sees her thieving to help her very poor family get by. As she is betrayed repeatedly and forced to live with and become one of the people she hates, her responses are brilliant and unpredictable. This book has one of the best twists I’ve ever read and Mare makes a great lead because she is witty, brave and loyal and in other ways, unlike most of your average YA protagonists.

What a character – starts off as an adorable carer for his mother, then kills a man and goes on to change the world(s) with the other main protagonist, Lyra Belacqua. He is loving, fiercely loyal, determined, brave and is the most relatable character that I’ve found, for me, in fiction. His story arc almost had me in tears several times and without giving anything away, the way he picks himself up and plods onwards after each knock back is incredible. I hope the new TV series does himself, and these tremendous books, justice.

The Fault in our stars (John Green) – Hazel Lancaster 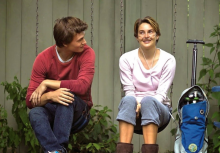 I love Hazel Grace simply because she couldn’t be any less like your average female protagonist. She is a teen with cancer, but refuses to be defined by it. She is constantly pulling around her medical equipment, is always short of breath and has desperately protective parents to manage. But despite her physical impediments, Hazel has a resolve of steel. She drives the story and stays strong emotionally, even while she’s staring down her own mortality, and she seems to handle it better than everyone around her. When things go awol for her boyfriend Augustus, Hazel remains unwavering and there for him; and she survives his loss with a grace most of us can only aspire to. 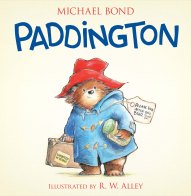 I still find it entirely believable that a little grizzly could wear a duffle coat and squashy hat and enjoy a marmalade sandwich. I’m sure he’d be repatriated as an asylum-seeker today, but I still get a little thrill every time I step off onto Paddington Station because you never know…

My first romantic heroine, Heathcliff’s love dies part of the way through the book but her character, both alive and dead, continues to haunt him. She is free-spirited and beautiful, as well as spiteful, arrogant and childish. But she is an unforgettable protagonist and for me, represents the wild, untameable nature of the Yorkshire moors.

Favourite protagonist?  Well, that’s a bit like asking me to pick my favourite chocolate bar, or red wine.  SO difficult.  In fact, impossible.  Every time I think of one another pops into my head, then another and another.  Here it goes!

Hazel from The Fault in Our Stars by John Green because she’s so strong and funny and brave and normal.  Even though her life is limited by her disease, she fights those limits all the way.

Kasienka from The Weight of Water by Sarah Crossan.

A complete fish out of water, Kasienka has no idea how to go about fitting in as an immigrant in England.  Everything is new and strange to her.  But Kasienka battles on making a life for herself. (Thinking about it, I could just as easily substitute Grace, Tippi, Alina, Bea, Quinn or any other of Sarah’s characters.  All fab!)

Dallas and Florida from Ruby Holler by Sharon Creech.
I love these two.  They’re brave and strange and funny and honest.  As twins, they know each other inside out and always have each other’s back.  And they’re more than a match for the ‘putrid’ Trepids.

Anna from The It Girl Series by Katy Birchall.

Anna is funny, funny, funny. Sometimes it’s the laugh-out-loud funny that makes your nearest and dearest look strangely across the room at you while you read.  Other times it’s the sort of funny that makes you turn your head away from the page because you are living Anna’s embarrassment with her.  You can see exactly where things are going and there’s nothing you can do to stop it.  Poor Anna.

To do the impossible and come up with just one favourite protagonist, I decided to focus on new arrivals from the last couple of years. That didn’t help half as much as I’d thought it might. So, I had to go all Simon Cowell, get brutal and find a way of slashing the list again. I homed in on comedy and drew up a short list of semi-finalists. The winner… was Ben!

I keep finding lots of people who haven’t read Boys Don’t Knit yet. Are you one of them? Shame on you! To give you a taster, let me set the scene. There’s a couple of minor spoilers here but nothing to ruin your enjoyment.

It all starts with an unfortunate incident, involving a lollipop lady and a bottle of Martini Rosso (that’s not as bad as it sounds). Ben’s short lived and accidental life of crime, means that he’s now on probation. He’s required to ‘Give Something Back’ to the community and reassert himself as an upstanding member of society. Part of the deal is that he signs up for an evening class. He plumps for knitting – there’s not a lot of choice and he fancies the tutor.

Turns out he’s a natural and he soon finds himself thrust into the cutthroat world of competitive knitting. Think The Hunger Games with angora. In fact Ben would be thrilled to find himself sharing this week’s blog/vlog with Katniss as he makes the comparison more than once. Anyhow, he also knits himself a tangled web of lies (sorry, couldn’t resist it), to conceal his new passion for all things wool – from his dad, mates – and basically everyone else who might think it’s all a bit too girly.

Why do I love Ben as a protagonist? Firstly, Tom Easton has given

him a very strong voice. Ben’s journal entries often make me giggle but there’s a lot of depth to him as well and his observations are occasionally quite touching . As someone who’s also had to check the wisdom of taking a ‘holistic approach’ to worrying (Ben’s description of his penchant for worrying about a long list of things all at the same time), I can definitely relate. He’s a caring and thoughtful soul and whilst he can be occasionally blind to the obvious, he is also very perceptive about most things that matter. Basically, I love Ben because in a world where it is difficult and sometimes scary to be different, he is brave enough to be who he needs to be. Brave and bold! And while he’s on his own journey, trying to make sense of all the confusing relationships he’s in, he’s also pretty pivotal in the growth of people around him.

Okay, so Ben may not be slaying dark forces or saving the  future of humanity like some other YA protagonists – but he creates his own magic via a pair of needles and processed sheep fibre. If you want to meet a real hero – Ben’s your guy!